Book Sukinoyado Yakakutei in Kirishima Onsen (Kagoshima) – All guest rooms are supplied with hot spring water. This ryokan is divided into two areas, the Main Building and the Annex. The latter is composed of five detached rooms scattered throughout a Japanese garden, four with open-air baths and one with a cypress bath. The garden, designed by a famed gardener from Kyoto, and the outdoor hallway have a unique and traditional Japanese ambiance. The quaint beauty of the garden’s moss on rainy days is particularly famous.

Access: It is accessible from the Kagoshima Airport by taking a 12-min taxi ride.

The renowned hot spring at Yakakutei, called Hinatayama Onsen, has a history of 800 years and is even involved in Japan’s creation myth. Famous heroes in the country’s history, including Saigo Takamori and Sakamoto Ryoma, are known as great fans of this onsen.

The customer reviews for Sukinoyado Yakakutei are owned & provided by TripAdvisor 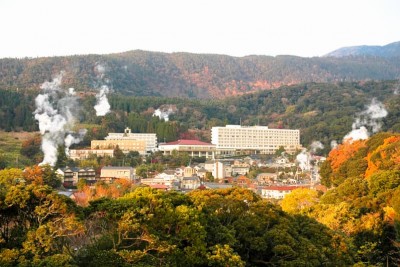